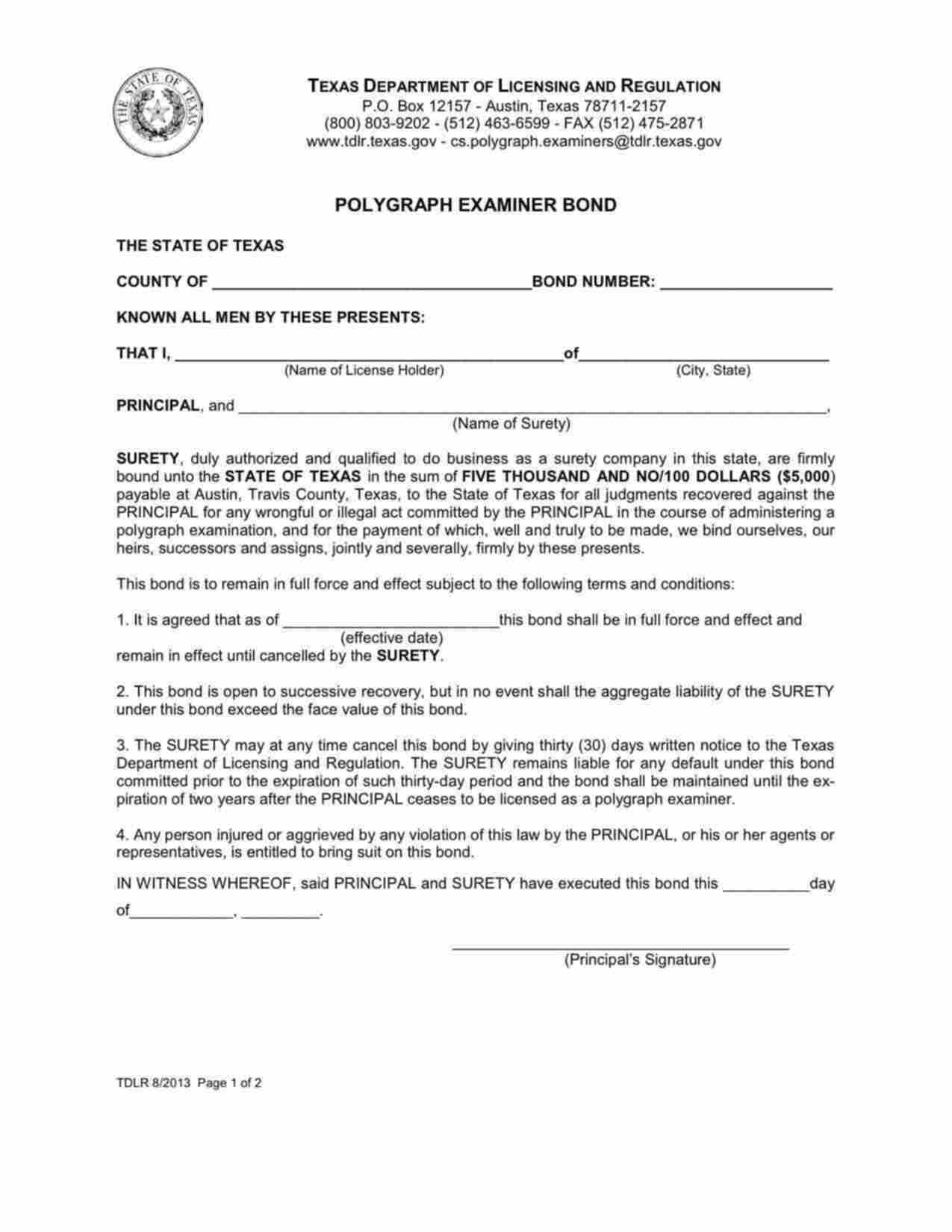 What Is the Purpose of the Polygraph Examiner Bond?

The Texas Department of Licensing and Regulation requires a Polygraph Examiner Bond to be filed as a requirement for the polygraph examiner license. The bond has a limit of $5,000 to be used as protection against an examiner who conducts a polygraph examination in an unsavory or illegal manner.

As an alternative, the TDLR (Texas Department of License and Regulation) will accept an insurance policy in the amount of $5,000.

The surety company must complete the Polygraph Examiner Bond and have the form notarized before sending it to the examiner (principal). The examiner is responsible for signing the bond before filing it with the Department at the address below:

The examiner must have a bond in effect at all times during the license. Bond renewals are an important aspect of license renewals.

Cancellations can be requested by giving the Department 30 day’s notice. Liability will continue until the 30 days have passed. The Department will release the surety company from liability at that point, but the bond will be able to receive claims on actions during the active period of the bond for two years following the release of liability.

What Do Surety Companies Need to Know About the Polygraph Examiner Bond?

This bond is conditioned to account for damages caused by a polygraph examiner who has conducted an unlawful lie detection test or other tool to survey whether deception exists. An examiner is obligated to comply with the following rules and regulations when applicable:

Violating the rules and regulations given here will result in the Department taking disciplinary action in the form of fines, penalties, or injunctions. Additionally, a claim on the bond can be filed for all judgments recovered for a polygraph examiner’s immoral or illegal actions.

In general, this bond does not yield much risk and may be written freely by surety companies. The $5,000 bond limit is evidence of that. Most of the risk comes from the ability to file claims up to two years after the bond’s liability period has ceased; the offensive action must have taken place during the active period of the bond.

How Much Does the Polygraph Examiner Bond Cost?

The Polygraph Examiner Bond can be offered as low as $100. This bond is typically freely written.