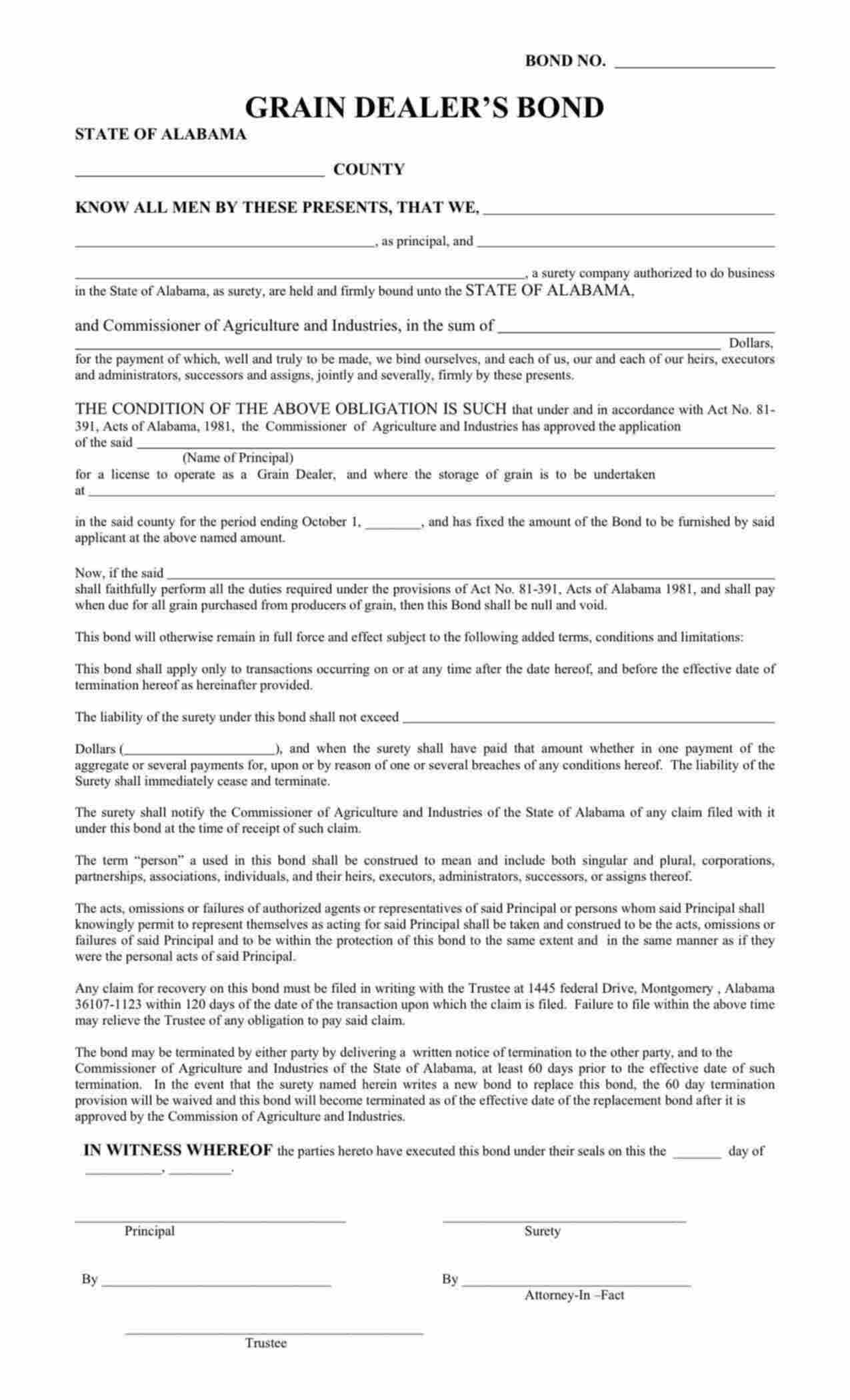 What Is the Purpose of the Grain Dealer Bond and Warehouseman’s Bond?

The Alabama Department of Agriculture and Industries (ADAI), Gins and Warehouses Division, is tasked with creating and enforcing regulations for grain dealers and public warehouses, including cotton warehouses and grain warehouses. Part of the regulations for both grain dealers and warehouses is obtaining a surety bond. The bond acts as an extension of credit for the licensee which financially protects the ADAI and the public should the licensee act in a fraudulent manner while conducting business.

Who Needs a Grain Dealer Bond or Warehouseman’s Bond?

Per Section 8-15-7 of the Code of Alabama 1975, the Warehouseman’s Bond is required for an operator of a public warehouse that is used for the storage of cotton or other agricultural articles.

Per Section 2-31-4 of the Code of Alabama 1975, the Grain Dealer Bond is required for a licensee operating a grain elevator, or similar structure, and who buys/receives grain from producers or grain brokers for storage, milling, processing, or resale.

The following are exempt from the Grain Dealer Bond requirement: Dealers or processors of seed, grain farmers buying grain for use as seed or feed, and anyone licensed under the United States Department of Agriculture Warehouse Act.

What Do Surety Underwriters Need to Know About Grain Dealer Bonds and Warehouseman’s Bonds?

For both bonds, several actions can lead to a suspension or revocation of the license, fines, and a potential claim on the bond. Inability or failure to abide by the statutes is the most common reason for disciplinary action from the ADAI.

Any person can file a written complaint with the Commissioner of Agriculture and Industries if the licensee is in violation of the applicable law, rules, or regulations. The Commissioner may then conduct an investigation and schedule a hearing to determine a course of action and the bond may come into play.

The most common reasons action would be taken against a warehouse operator would be if they do not pay permit fees, the warehouse is not in suitable condition, or the warehouse is being used for purposes other than what the permit allows.

For grain dealers, the most common reasons an infraction against the permit would occur include not paying for grain purchased, failure to maintain the required bond and/or liability insurance, and performing duties prior to receiving a license.

Although there are reasons a claim may occur, it is very uncommon. According to industry experts, losses for these bonds sit around 5.3% nationally, and 0% in Alabama. Due to the ADAI’s involvement, most issues are resolved prior to the bond being used as restitution.

Even with the low risk of a claim, Suretypedia recommends checking the credit of the applicant, especially for larger bond limits, and possibly reviewing financial statements.

What Do Surety Claims Handlers Need to Know About the Grain Dealer Bond and Warehouseman’s Bond?

Claims come from the Alabama Department of Agriculture and Industries, either for their own reasons or on behalf of the public. The ADAI investigates written complaints from the public and may schedule a court hearing prior to pursuing a claim on the bond.

For public warehouses, the surety bond is not the only coverage required. Warehouse operators may also need to furnish proof of liability insurance on commodities stored in the warehouse. This can mitigate the bond being used as reimbursement for some actions.

Suretypedia has not been able to locate a standard bond claim handling timeframe for surety companies in Alabama. It varies depending on the obligee and their specific requirements. However, the Insurance Code of Alabama does state that a carrier has 15 days to acknowledge receipt of a claim and accept or reject the claim within 30 days after receipt of proof of loss.

Can a Grain Dealer or Public Warehouse Avoid the Bond Requirement?

Within the statutes, there are no replacements for the Warehouseman’s Bond.

How Much Does a Grain Dealer Bond or Warehouseman’s Bond Cost?

The bond limit for the Grain Dealer Bond is variable, which is calculated as 10% of the total aggregate amount paid by the dealer for grain purchased from producers during the past 12-month license period. That said, the bond amount is never less than $25,000 or greater than $100,000. Those who have operated as a grain dealer for under one year must only meet the minimum bond requirement of $25,000 for the first year. A bond is required for each location.

The bond amount required by the ADAI for the Warehouseman’s Bond is $5,000 maximum, but will be determined by the Agriculture and Industries Commissioner after reviewing the total storage capacity.

Both the Grain Dealer Bond and the Warehouseman’s Bond should be completed, signed, and sealed, then sent to the following address:

Can the Alabama Warehouseman’s Bond and Grain Dealer Bond Be Cancelled?

Are the Warehouseman’s Bond and Grain Dealer Bond Renewable?

Yes, both bonds must be renewed for as long as the licensee is operating. These bonds are considered continuous, so as long as payment is made by the licensee prior to the renewal date, the bond will remain active. The grain dealer’s license is renewed annually on or before October 1st, and the public warehouseman’s license permit ends on July 31st.