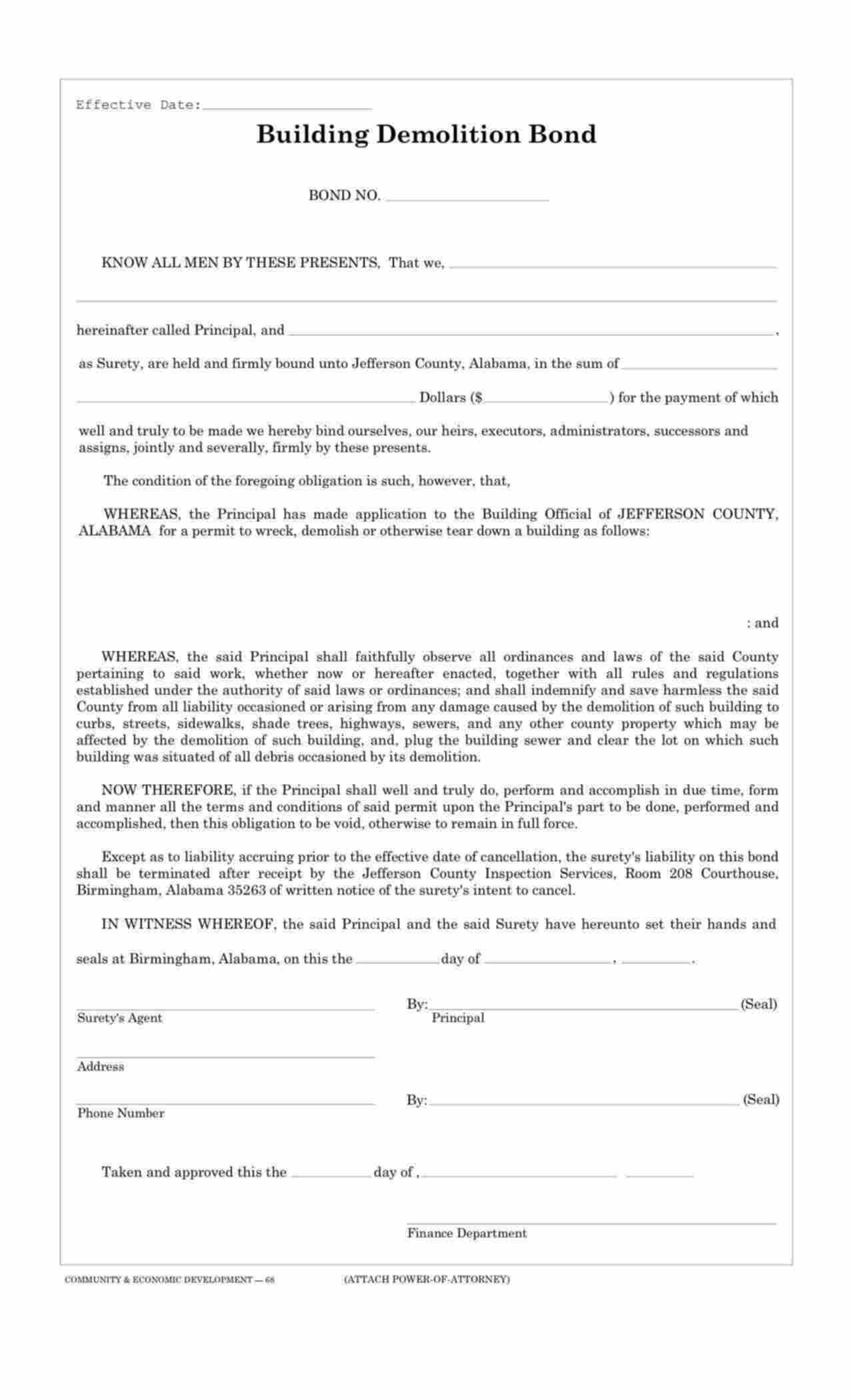 What Is the Purpose of the Jefferson Building Demolition Bond and Structure Moving Bond?

Jefferson County requires contractors that are applying for a permit to move a structure or to perform demolition on a building to acquire a $5,000 surety bond. The Building Demolition Bond and Structure Moving Bond ensure that the contractor will follow the rules and regulations of their permit and acts as a financial guarantee in cases of poor workmanship or damages caused.

According to the Development Services Building Division, contractors will need individual permits to move a structure or to wreck, demolish, or tear down a building. Obtaining the necessary $5,000 surety bond is a requirement of each permit. No alternatives to the bonding requirement exist.

What Do Surety Companies Need to Know About each Building Permit Bond?

Suretypedia has confirmed with Jefferson County that as of 2020, no claims have been made in the last 20 years on either surety bond. Meaning, the Building Demolition Bond and Structure Moving Bond are very low risk for underwriters to take on in Alabama. The required bond limit is relatively low; a standard credit check of the applicant is recommended when offering rates.

Licensed contractors are expected to follow all regulations pursuant to the Jefferson County Building Code, Section 3303, as well as the terms and conditions of their permit. Failure to do so can lead to a loss of license, large fines, and a possible bond claim. Although, claims will typically occur if the contractor’s finished work does not meet the standards of their permit, or if they caused damages and refuse to fix them upon the county’s request.

The Building Demolition Bond has a standard cancellation procedure. The surety provider may send a bond cancellation notice to Jefferson County’s Building Official and liability of the bond will be released within 30 days. The Structure Moving Bond does not specify an acceptable cancellation procedure; the surety provider will need to receive a written release from the Building Official in order to confirm that the bond has been officially cancelled and they are released of all future liability.

How Much Do the Jefferson Building Permit Bonds Cost?

The Jefferson County Structure Moving Bond and Building Demolition Bond have a required $5,000 limit. Rates will typically be based on 1 to 10% of the bond limit and the personal credit score of the applicant.

Jefferson County requires the original, signed and sealed surety bond to be filed with their Development Services Building Division. The bond must remain on file for the entire duration of the permit or until the job has been approved for completion status.

The signed and sealed bond form should be mailed to the following address:

Building Permit applications must be submitted before the required surety bond can be officially filed. The application can be sent to the above address as well.

The Jefferson Building Demolition Bond and Structure Moving Bond are permit surety bonds and are typically not renewed, but if the permit work takes longer than the original bond term, renewal of the bond is required in order to maintain that permit.