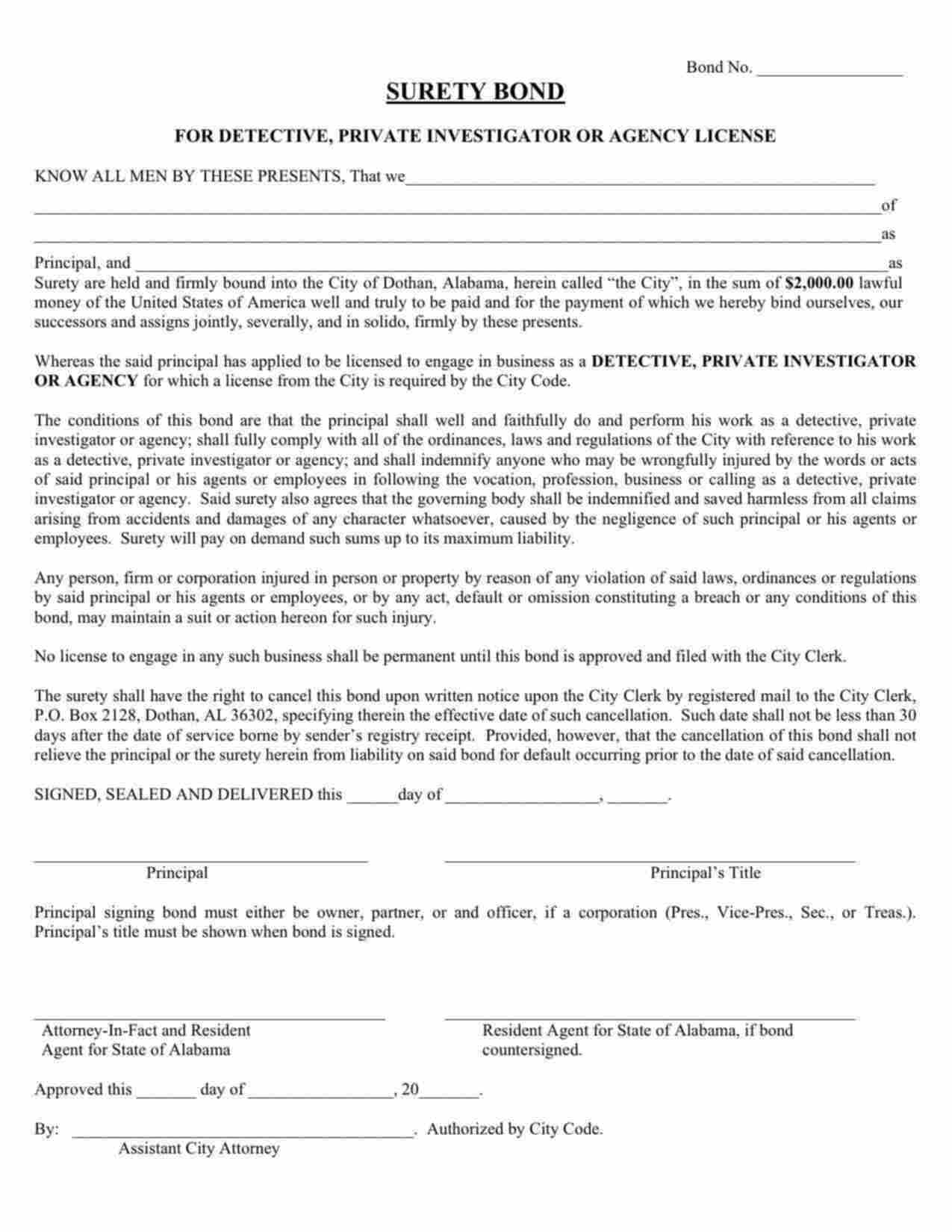 What Is the Purpose of the Indemnity Bond for Detective Agencies, Private Investigators, and Security Guards?

In the State of Alabama, any person performing as a private investigator must obtain a license, per the Code of Alabama Section 34-25B-3, holding all licensees to the standards of conduct and professionalism as detailed by the Alabama Private Investigation Board (ASIB). Similarly, security guards in Alabama are required by the Alabama Security Regulatory Board (ASRB) under Code of Alabama Section 34-27C-4 to obtain a license to operate in the State. At the local level, many city governments in Alabama also require detective agencies, private investigators, and security guards to post a surety bond to indemnify any parties who might be damaged by the unlawful actions of a licensee.

What Do Surety Companies Need to Know About the Indemnity Bond for Detective Agencies, Private Investigators, and Security Guards?

Claims against the city indemnity bonds would materialize when a principal licensee violates the law in the course of their investigation or law enforcement action, and it results in damages to a member of the public.

The risk of a bond claim is somewhat mitigated, however, by the licensing processes enforced by the state-level obligees (ALIB and ASRB). Their licensing process should identify the propensity for the kind of illegal behaviors that would result in a claim against a private investigator or security guard. Beyond such vetting based on personal character, financial responsibility also could provide an indication of an applicant’s risk of acting illegally. Surety carriers may analyze personal credit scores as underwriting criteria in order to identify applicants of high risk of financial desperation.

How Much Does the Indemnity Bond for Detective Agencies, Private Investigators, and Security Guards Cost?

Alabama cities require varying total bond amounts. (See the table below for bond amounts in each jurisdiction.) The surety industry typically charges 1% to 5% of the bond amount.

The indemnity bond for detective agencies, private investigators, and security guards is continuous until cancelled, similar to most license bonds. Cancellation periods range from 10 to 30 days by the various obligees.

Renewal anniversary dates for any particular city’s bond are not tied to the state-issued license anniversary of the principal, but are referenced to the date that the principal first applied to work in that jurisdiction.

Most obligee cities require the sealed original version of the bond to be delivered to their various city offices. For the mailing addresses of the obligees, see the table below:

Do Special Investigators, Detective Agencies, and Security Guards Need Any Other Bonds?

While special investigators, detective agencies, and security guards are required by the State to obtain licenses, they are not required to post a bond under the Code of Alabama. Bonding requirements are only imposed by the city-level obligees.