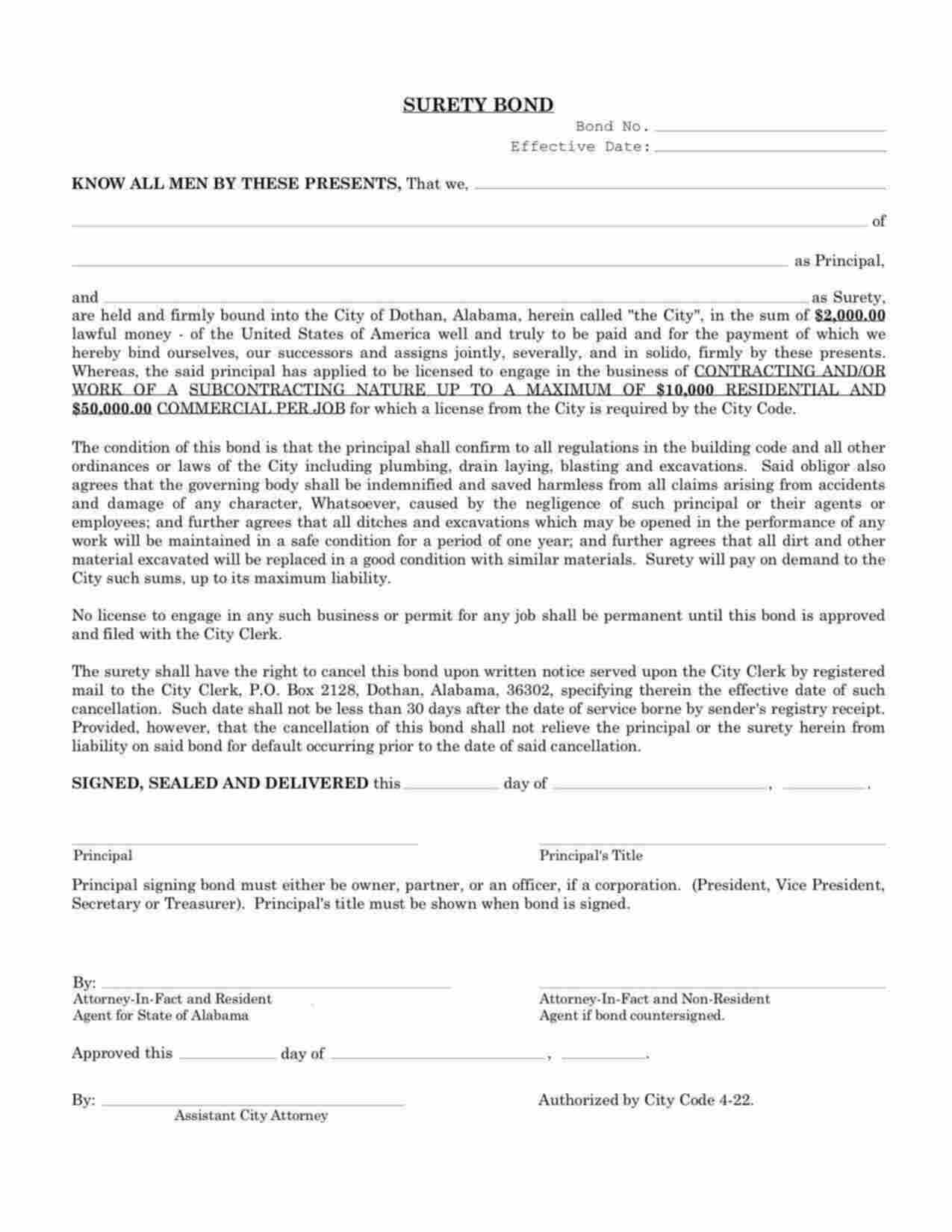 What Is the Purpose of the License Bond for a Contractor in Dothan?

The City of Dothan, Alabama enforces contractors of varying specialties to obtain a Contractor License Bond to work in Dothan. This indemnity bond is a tool used by the City of Dothan for the protection of their people as it guarantees reimbursement should the contractor default on a contract and fail to fix the issue.

Which Businesses in Dothan Need the Contractor Bond?

Contractor License Bonds are required for certain trades in varying amounts as follows:

Contractors are defined in Chapter 18 of the Dothan, Alabama Code of Ordinances. No bond is required of painting and wall covering contractors and contractors installing home security systems.

What Do Surety Underwriters Need to Know About the Dothan Contractor Bond?

The City of Dothan only has bond forms for some of the trades. If an underwriter is unsure which bond form to use, it is best to contact Business Licensing Services at the City of Dothan to make sure the indemnity bond is filed on the correct form.

After consulting with knowledgeable entities, losses on these bonds are few and far between. Even when they do, the risk of the contractor losing their license often makes them pay for the claim immediately. Out of all the trades, tree trimmers see the most claims on their bond from failing to properly clean up a site. Civil and criminal penalties are often assessed prior to the bond being utilized for restitution.

Regardless of the trade, the maximum bond limit is $10,000. With the low bond limit, it reduces the surety company’s exposure to paying out large claims.

The City of Dothan requires a 30-day cancellation notice for which the bond is kept on file and active.

A credit check of the contractor is often completed. However, with the low limit and small risk of claims, some surety companies choose to write the bond freely.

What Do Surety Claims Handlers Need to Know About the Dothan Contractor Bond?

Pursuant to the Dothan, Alabama Code of Ordinances, Chapter 14, Section 14-41, any person or entity, including the City of Dothan, who sustains financial damage as a direct result of the licensed contractor can bring action against them.

Some contractors may have a general liability insurance policy in place which protects third parties and properties from damages. Claims handlers should see if there is an existing policy to see if damages may be covered under the policy.

In the Alabama Administrative Code, there is no specific surety bond claims handling process, but the code does state that insurance carriers have 15 days to respond to claims and 30 days to pay or reject a claim upon the proof of loss being filed.

Can a Contractor Avoid the License Bond Requirement in Dothan, Alabama?

No, there are no alternatives or exemptions to the Dothan Contractor License Bond.

How Much Does the Dothan Contractor Bond Cost?

The bond typically starts at around $100 for one year of coverage. Rates can vary depending on the personal credit of the licensed contractor.

How Is the Contractor License Bond Filed to the City of Dothan?

Dothan requires all bonds to be signed by both the surety company and the contractor. The surety is to seal and mail the original bond to the following address:

Can the Dothan Contractor Bond Be Cancelled?

Yes, the bond can be canceled with a 30-day formal written notice to the Dothan City Treasurer. The surety company and contractor are liable during those 30 days, so it is important to take that time into account when calculating the refund, when applicable.

Yes, the bond must remain active for as long as the contractor is licensed and working. Bonds are most commonly issued in one- or multi-year terms which must be renewed prior to the bond’s expiration date. The surety company has the right to cancel the bond at any time, for reasons such as nonpayment.

Do Contractors in Dothan Need Any Other Bonds?

There are two state-level bonds required in Alabama for contractors: the $15,000 Heating and Air Conditioning and/or Refrigeration Contractor Bond and the  $10,000 Residential Roofer Bond.