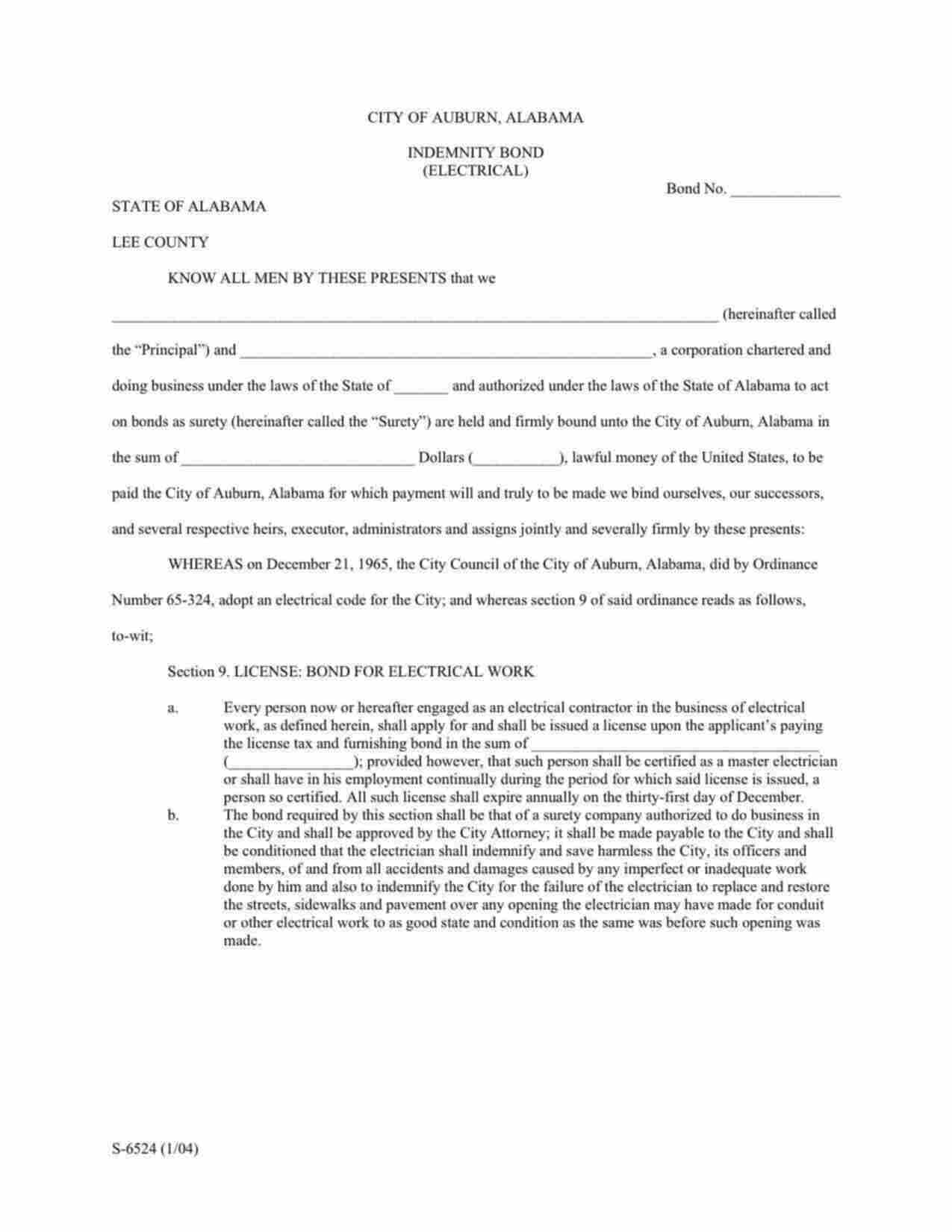 What Is the Purpose of the Auburn Contractor License Bond?

Which Businesses Need the Contractor Indemnity Bond in Auburn, AL?

Electricians and Plumbers need to be licensed within the city for work performed and along with the licensing requirement come a $5,000 bonding requirement.

What Do Surety Underwriters Need to Know About Auburn’s Contractor Bond Requirement?

The bond forms and the City of Auburn Code of Ordinance are quite clear the bond covers the following areas:

While a typical contractor bond will cover nearly any damage caused, including the three reasons mentioned above, it is not typical to expressly list coverage for fees, taxes, or restoration on right-of-ways. This could be Auburn’s attempt to streamline surety indemnification for tax compliance and permitting, which is clever to say the least. Underwriters may have to consider this could be smoke billowing out and fire behind it all.

However, with such low bond limits and Alabama having a historically lower instance of bond claim surety companies should have confidence writing these bonds. Most often a surety company will freely write these bonds without a credit check.

What Do Surety Claims Handlers Need to Know About Auburn’s Contractor Bond?

A claim will most likely be filed by the City of Auburn and could be directly from the contractor’s customers. Beyond an outright failure to pay taxes or fees or cause damages city building codes must be observed.

General contractors must abide by the Southern Standard Building Code of 1973. Electricians are under the City of Auburn Ordinance #65-624 and plumbers are under Ordinance #831.

Contractors may (more like should) carry general liability coverage. If that coverage exists any damages to third-party property or property not being worked on should be covered. Surety handlers should inquire if a general liability policy exists.

Claims can come in for up to a period of one year following the completion of work when concerning any job that may have affected public thoroughfares.

Are There Any Alternatives to the Surety Bond?

The City of Auburn will allow a cash deposit in lieu of providing the surety bond. At $1,000 or $5,000, this does not seem to be much trouble, but when compared to the relatively low bond premiums a full cash deposit does not make much sense.

How Much Does the City of Auburn Contractor Bond Cost?

The cost for the bond is around $100 and is rarely more. Surety companies will offer multi-year bonds at a discounted rate.

How Is the Contractor Bond Form Filed?

The bond form is sent to the following address:

Can the Bond Be Cancelled With the City of Auburn?

Do Contractor Bonds in Auburn, AL Need to Renew?

The bond must be in place for generals, electricians and plumbers to be licensed. Therefore, the principal (contractor) must renew the bond at the end of the term to extend coverage.

The bond form is not continuous in nature but does not express an expiration date.  The absence of evidence is not the evidence of absence. It can be asserted that the bond is continuous until cancelled and the surety will remain liable until they actively cancel the bond.

What Other Bonds Do Contractors in Auburn Need?

General contractors, electricians, and plumbers need only the bond for the City of Auburn. HVAC and residential roofing contractors have bonding obligations that run to the State of Alabama.